The wedding cards of Riteish and Genelia were manufactured by a leading wedding card maker in Bandra, who also designed the cards for Hrithik Roshan and Lara Dutta’s wedding. The white, pink and gold wedding cards were placed in a wooden box, monogrammed with the couples initials (R&G). 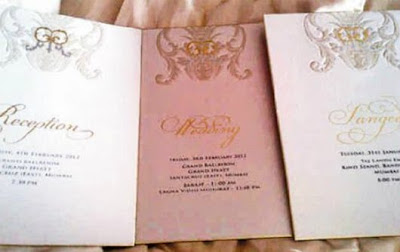 Inside the box were a few hand-made chocolates, each of which was decorated with the initials of the couple. The couple had wanted the wedding cards be simple, yet stylish and beautiful, at the same time.

The Sangeet function was held on January 31st 2012 at the Taj Land’s End Hotel in Bandra. The venue was decorated with pink, white and blue decorations to match the wedding outfits of the couple. In fact, the main ballroom had a beautiful canopy in pink and white, with blue disco lights. Genelia was wearing a white lehenga with peach embellishments and detailed stone work, while Riteish wore a striking royal blue Sherwani and white dhoti pajama. 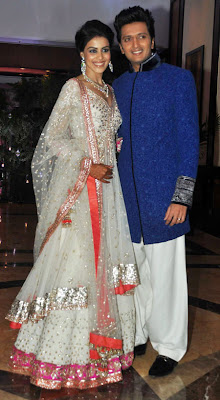 The sangeet of Genelia D’souza and Riteish Deshmukh was attended by top Bollywood celebrities, such as Abhishek Bachchan, Shahid Kapoor, Rishi Kapoor, Sanjay Dutt and their families. The marriage function saw performances by Aftab Shivdasani, who performed a skit using a cardboard cut-out of Ritesh. At the end, Riteish and Genelia danced to the Marathi song Kombdi Pallali, together with their families.

A day before the Maharashtrian wedding, Genelia’s family conducted a traditional East-Indian pre-wedding function called Umbracha Pani, at her home. 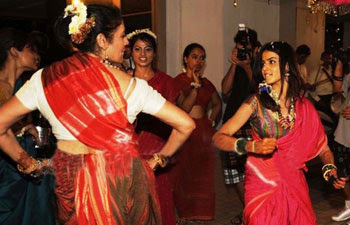 In the ceremony, women of the family wear knee-length Maharashtrian sarees, and go dancing to a well to draw water. Genelia was seen at this function, dressed in a pink kashta saree, and wearing mehendi, traditional green bangles and gajra. She also rode a horse, and danced on the street with her relatives.

Genelia and Ritesh both had a haldi ceremony, during which friends and relatives rubbed haldi (turmeric) on their skin. This yellow paste gives the skin a lovely glow, and is said to wash away impurities. In addition, Genelia also had a traditional Manglorean/Goan Roce ceremony during which she was rubbed with coconut juice and oil by her relatives, before being given a ritual bath with hot water.

This wedding function was held on the 3rd February at the Grand Hyatt Hotel in Bandra. It was a public affair attended by well-known figures from Bollywood and Indian politics. 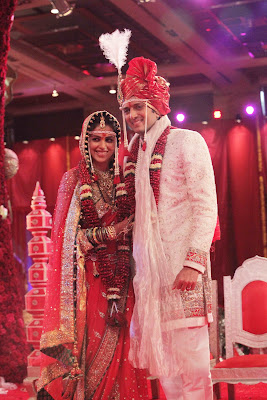 The baraat left Riteish's residence in Juhu at 11 am, and the wedding rituals began sharp at 12.48 pm at the hotel, according to the pre-decided mahurat. Genelia wore a red sari designed by Neeta Lulla, while Riteish wore a white sherwani.

This ceremony was held on the 4th of February at 10.00 am, at St.Anne’s Roman Catholic Church in Bandra. It was a private affair, attended by close friends and family of the bride. Riteish’s brothers (Amit and Dheeraj), and a few of his close pals were also seen at the church wedding. The marriage was presided over by a Catholic priest, who took the couple through their wedding vows. 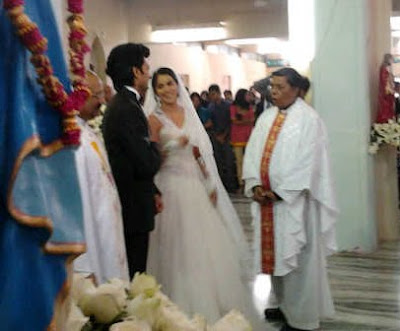 For this ceremony, Genelia wore a beautiful wedding gown designed by Shantanu & Nikhil, while Riteish wore a simple black suit. Genelia also carried a traditional bouquet of white roses, as seen in this photo, below. Bridesmaids were dressed in peach gowns. 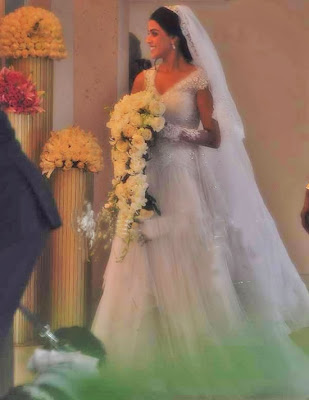 The church wedding of Genelia D'souza and Riteish Deshmukh was followed by a small reception party, during which the couple cut a traditional white wedding cake, and danced to wedding songs played by a band. At the end of the party, both were hoisted on chairs by their friends, and were carried around to the tunes of 'He's a jolly good fellow', before they were allowed to finally kiss. 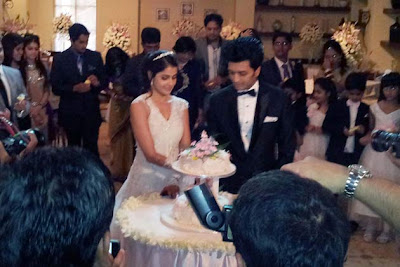 Wedding Reception of Riteish and Genelia

This function was held in the evening at the Grand Hyatt Hotel, after Genelia’s church wedding. Genelia was dressed in a heavily decorated red lehenga with short sleeves, and wore exquisite uncut diamond jewellery, made by Rajwada jewellers. This wedding jewellery consisted of a choker, ear-rings and bracelets. Click on the wedding photos to view more details of bridal jewellery, embroidery, lacework etc. on the wedding outfits. 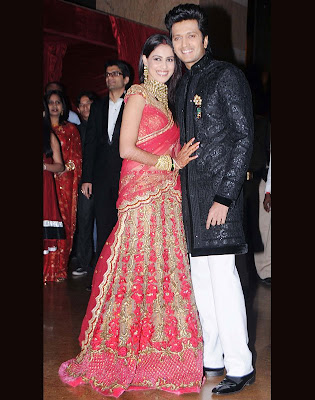 
Profile of the Couple

Thirty-year-old Genelia D’souza was born in Mumbai, and raised in the Bandra area. She is a Manglorean Catholic. Her mother Jeanette was the MD of a pharma MNC, while her father Neil works with Tata Consultancy Services. She has a younger brother, Nigel who works with the Bombay Stock Exchange. Genelia studied at the Apostolic Carmel High School in Bandra, and has a bachelor’s degree in management from St. Andrew's College, Bandra.

Thirty-three year old Ritesh Deshmukh was also born in Mumbai. This Sagittarian is a Bollywood actor and the son of Vilasrao Deshmukh, a Union Minister. He studied at G. D. Somani High School, before getting a degree in architecture from Kamala Raheja School of Architecture in Mumbai.

The couple met in 2003, during the shooting of their first film ‘Tujhe Meri Kasam’ produced by K. Vijaya Bhaskar. They dated for more than eight years, before deciding to tie the knot.

Wishing Riteish and Genelia a very happy married life! Hope you liked these wedding photos of Ritish Deshmukh and Genelia D'souza. What do you think of the outfits worn at this inter-faith marriage?

We'd love to hear from you. Please post a comment below to let us know what you think!