Wanting to try something new this New Year, we decided to go ice-skating. I had recently come across a newspaper ad for a new ice-skating rink in the Delhi area, and wanted to give it a try.

Well, this ice-skating rink turned out to be much bigger and better than I had expected. It was located on the sixth floor of the Ambiance Mall in Gurgaon, and was spread out over 15,000 square feet. I thought it would be quite cold in the ice-rink, and had brought lots of woolens along. However, it wasn’t; and as I skated I began to feel hotter and hotter, and finally took off my jacket. 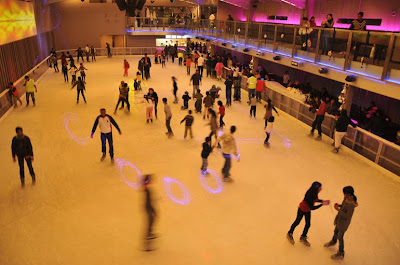 Tickets were expensive, but that was expected as maintenance costs are sure to be high. As we went on a weekend, we had to pay Rs.400 for a one hour 15 minute session. We were allowed to enter about 15 minutes before our scheduled time, so that we could put on ice-skates. These grey-coloured figure skates were provided by the ice-rink, and were available in all sizes. As we had booked tickets for a disco session, there was DJ music and strobe lights throughout our session, as well

Below is the price list of iSkate in Ambi Mall:
There were lots of coaches and trainers around (some foreign) to guide you about ice-skating, and give tips. There were also marshals to pick up fallen people, ensure that everyone skates in an anti-clockwise direction, and do not stare.

According to Bird Group, the company that owns this ice-skating rink in Delhi, iSkate has a capacity for 200 people. At the beginning of the session, there were more than 150 people on the rink, but this number soon lessened as people began walking off due to various reasons, like tiredness, injury, embarrassment or soaking pants. I fell down about six-seven times, and so did my friends. A useful tip: Tie your jacket around your waist to minimise the impact of falling on your behind. Also ensure that there is nothing sharp in your jacket, or else…

iSkate is open from 10am to 10pm. This ice-skating rink in Delhi also has a café, where you can order snacks and drinks. It also has an upper level for spectators and parents to watch.

It is not easy to get here if you don’t have your own transport. The closest metro station is at IFFCO Chowk. You can also take a bus from Karol Bagh or Dhaula Kuan, get off at the toll bridge or at the mall, and walk.

Another ice-skating rink is believed to have opened in Kirti Nagar, for which I will write a review later. Have you ever tried ice-skating? What was your experience like?
Posted by Cyberkitty at 3:17 PM

Email ThisBlogThis!Share to TwitterShare to FacebookShare to Pinterest
Labels: Other Sports, Shopping

We'd love to hear from you. Please post a comment below to let us know what you think!