During the Christmas holidays, I dabbled in some painting after a long time and made the following snow globe painting based on the flat earth theory (or truth): 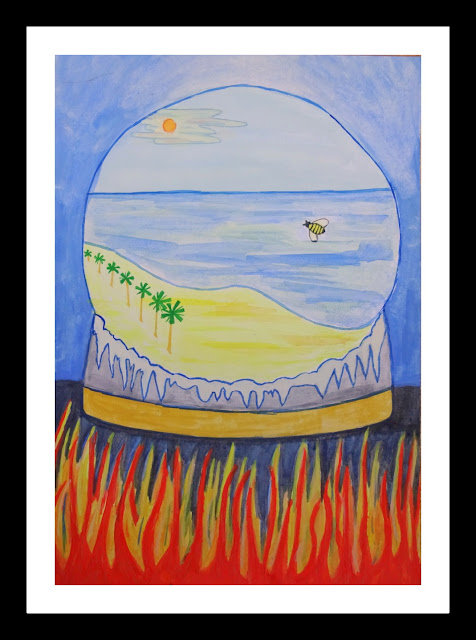 This artwork basically shows the flat horizon of the flat earth within a snow globe. The sun in the picture has clouds behind it. There is a honey bee to disprove gravity, and coconut palms appearing smaller due to perspective. Above the snow globe are the waters above and below it are the fires of hell.

This image is free for commercial use. No attribution is required.
Posted by Cyberkitty at 7:17 PM No comments: Links to this post

How are Lunar Eclipses Caused?

I have been thinking about lunar eclipses from both a heliocentric and geocentric (flat earth) perspective, and there are a few questions for which I haven't been able to find an answer. The so-called scientific explanation does not make a lot of sense - I've tried replicating it with small balls and a flashlight. From the flat earth perspective, I suppose there is a lot of thinking/experimenting to do to explain how the moon really works.

- Why do lunar eclipses happen only on a full moon night?

'Science' says this happens when the sun, moon and earth are in alignment. Can they never be in alignment when the moon is in a different phase? According to previous data, lunar eclipses can happen at any time in the night - from 6.00 pm to 6.00 am - then why not on a crescent moon night?

- Why does the moon turn reddish (blood moon)? Watch this time lapse video to see what I mean: https://www.youtube.com/watch?v=3TcPO0wYf1g

'Science' says the only light reaching the moon is refracted from the Earth's atmosphere. Really? From the dark night sky of the earth - red light is reflected? Over more than 384,400 kilometres? Then, why does the moon turn black - then glow reddish, and later turn black again?

According to 'science' this is because the shadow of the earth thrown on the moon is bigger, while the moon's shadow thrown on the earth (with the sun behind it) is smaller. However, the math does not add up for this.

- Why is there a six-month difference between the two lunar eclipses?

I found a possible answer to these questions in Indian Astronomy.

According to ancient Indian 'heliocentric' astronomers (like Aryabhata), 'Rahu' and 'Ketu' are ascending and descending nodes of the moon where the moon's orbit clashes with the sun's orbit (eliptic) on the common 'plane of the sky'. They fall six-months apart (lunar months), and hence there will be at least two in any given year. Hence, if the last one was on 31st January 2018, and the current one is on 27-28th July, then the next lunar eclipse would have to be on the full-moon night in January 2019.

According to geocentric Indian astronomers, Rahu and Ketu are two dark planets in the sky just like the other planets - Mercury,Venus, Mars, Jupiter and Saturn. As they move in particular orbits over the flat earth plane, it is not very difficult to predict their paths and the time of the next lunar eclipse - obviously the full moon night after another six months. As Rahu and Ketu are known to have a negative affect, it is best to stay indoors and follow best practices to safeguard oneself.

I still haven't found an answer to all the questions above, but the evidence of geocentric Indian astronomers (though ridiculed by modern brainwashed 'educated' Indians today) seems the most practical. What do you think?
Posted by Cyberkitty at 8:55 PM No comments: Links to this post

Went to Nehru Planetarium in New Delhi to view the Blue Moon Lunar Eclipse on 31st January. I saw chemtrails sprayed in the sky as soon as I arrived, and a crowd of kids and their parents waiting in anticipation in the lawn. 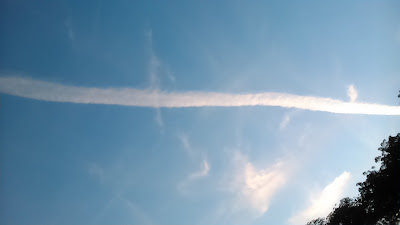 As the chemtrails were sprayed in the path of the Eclipse, it soon spread out. This made it seem as if the blood moon was covered in clouds. However, stars could be viewed on both sides, and Sirius and Orion were repeatedly pointed out by the announcer, together with 'Hubble's Space Telescope'. 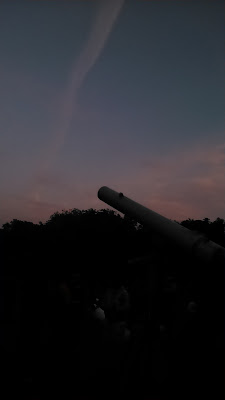 I was amazed at the telescopes there, but they were of no use because of the clouds. While some telescopes were from Nehru Planetarium, some people had brought personal telescopes which they were setting up on the lawn. I sat around for some time, waiting for the moon to appear, but it did not. We could see a slight hint of it behind the clouds when the trails parted a bit, but not very much. 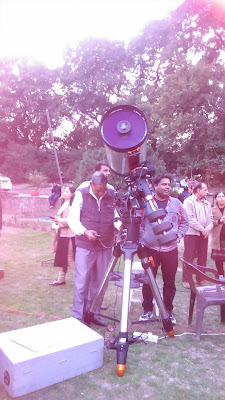 I heard from my friends that it could be clearly seen from other parts of Delhi, so I went off disappointed. I later saw the blood moon blue moon Lunar Eclipse from my rooftop. Seemed freaky. I watched it a bit with my binoculars, and then took a bath to ward off the ill effects.

Posted by Cyberkitty at 10:11 PM No comments: Links to this post